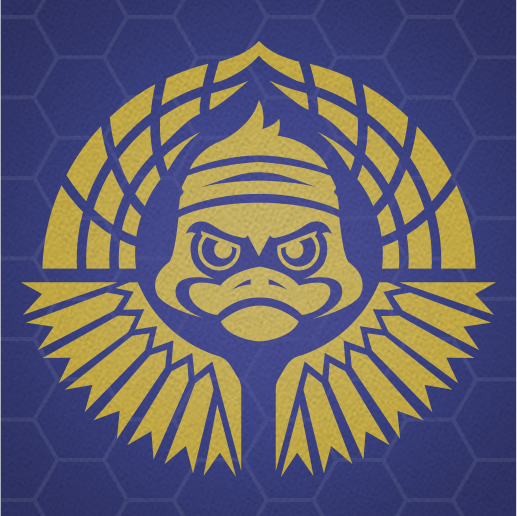 “Protect ducks, for when The End of Days comes, you will need their protection”

The Mallard Order is a powerful and devoted cult of duck worshippers. They believe they are the only ones who can protect the galaxy from extinction. They wear duck-looking hats, operate duck-looking ships, and inhabit Lagoon – a fractured world of flying islands, floating lakes, and astonishing hanging gardens. Despite the fact that the Mallard Order doesn’t have armies or large territories, it has been able to resist the Dominion for decades. The power of the Mallard Order lies in their unity and devotion.

The Mallard Order is a relatively new military entity on the global galactic scene. It started when a few decades ago, the Arkhan Dominion expedition found a paradise planet made of magnificent flying islands. These islands contained lakes, vegetation, hanging gardens, and were connected to each other via waterfalls – the islands below were watered by those above. But the most important thing, however, was that this world was inhabited solely by ducks.

The Dominion sailors decided to hunt some ducks as food, but the latter didn’t plan to become lunch. When the scouts attempted to catch one of them, a horde of ducks immediately attacked the intruders. Realizing the planet wouldn’t be easy for the taking, the Dominion decided to bring in their military power and establish colonies by force. Despite their best efforts, the ducks were no match for the military. The soldiers were hunting them for sport and for food, and as a result, the ducks had to retreat deeper into the planet.

Lots of people among the Dominion citizens opposed the colonization. Some started rioting, calling for the defense of the ducks. Others, the more determined ones, moved to the new planet and established a duck friendly community to protect them from the colonists. When the Dominion authorities declared them as criminals, the community turned to the Azurian Council for help. Due to their politics of non-interference, the Council couldn’t support them with military aid. Instead, they raised awareness of the situation and caused lots of animal rights activists from all corners of the galaxy to populate a duckish planet, which they would later call Lagoon.

Eventually, the community grew large enough to become a strong military power. At that point, it contained not only young adventurous activists, but seasoned sailors, experienced engineers, and even veteran soldiers. When the conflict escalated even further, the community started attacking the colonies with their new skyships. Baffled by this insolence, the Dominion launched a full-scale invasion fleet to cleanse the planet from the parasites. Little did they know what slumbers beneath, at the core of the planet.

When the Dominion fleet was nigh, millions of ducks gathered together and started quacking. Their quacks got stronger and louder until a deep roar could be heard from the core of the planet. A moment later, a gargantuan monstrosity, half Kraken half duck, emerged from the depths of the sea and took off to wreak havoc against the intruders. The Quacken, such as the name the community gave him, destroyed almost a half of the Dominion fleet, leaving the latter no choice but to retreat.

Following this glorious victory, the duck-friendly community rebranded itself into the Mallard Order, an actual military, political and cultural identity. A few decades passed since then, but the Dominion hasn’t given up its attempt to include the Lagoon planet into its territories. Luckily, as long as the Mallard Order has Quacken by their side, this is unlikely to happen. 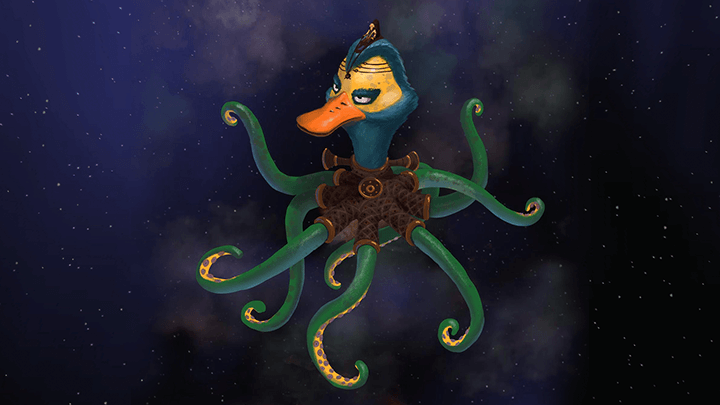 All About Mallard Order

The Mallard Order society is not always as welcoming as it may seem. Decades of wars against the Dominion and lack of help from other superpowers made them quite resentful and suspicious of intruders. They don’t welcome anyone in their ranks unless they complete Soul of the Swan trials, which not many were able to do. Additionally, while the Mallard Order founding members were activists who worked together towards a common goal, most of its modern members act more like a duck worshipping cult. On the bright side, being a member of the Mallard Order offers truly a unique life with a different set of values, perspectives, and traditions.

The Mallard Order members are extremely zealous and take all of their beliefs with sincerity. According to their epos, when ducks die, their spirits merge into Soul of the Swan, the bright constellation that can be seen from every corner of Lagoon. Other living beings are only allowed if they devoted their lives to the protection of ducks. Soul of the Swan is considered a primordial deity, the creator of all life, and the mother of Quacken. Quacken, in turn, is the youngest of her three children, the benefactor and the protector of all ducks in the universe. Her other two children hold the same roles for all swans and geese. And these, just like ducks, return to their spiritual mother in the afterlife. Although, it’s unclear whether there are separate worlds exclusively for geese and swans.

The Mallard Order has strict rules about its membership: members must renounce their previous lives, conduct daily prayers in one of the 13 ducks dialects, and always wear their Gadhats – traditional beak-shaped hats that symbolize the Mallard Order priesthood. All members heed to the voice of the High Priest/ess, who practically leads the Order. In order to become a High Priest/ess, one must tame and saddle Quacken himself. Being accepted by Quacken as his new rider is a sign that Soul of the Swan herself has appointed the person as her most trusted and devoted individual.

Over the years, the Mallard Order has accumulated tons of ancient knowledge about the Hyperborean galaxy, and even beyond. Should this knowledge fall into the wrong hands, the entire galaxy would be in danger. To prevent that, they protect this sacred knowledge with their own lives. Unfortunately, the powers that threaten the galaxy are far greater than they can handle. As such, for the first time of its existence, the Order is planning to form an actual alliance. Their most likely candidates are the Pastafarians.

They have smaller ships but their strength comes in unity – just like ducks, they always stay close to each other in defensive formations. These formations, called “rafting”, help them withstand heavy cannon fire and coordinate their attacks in perfect timings.