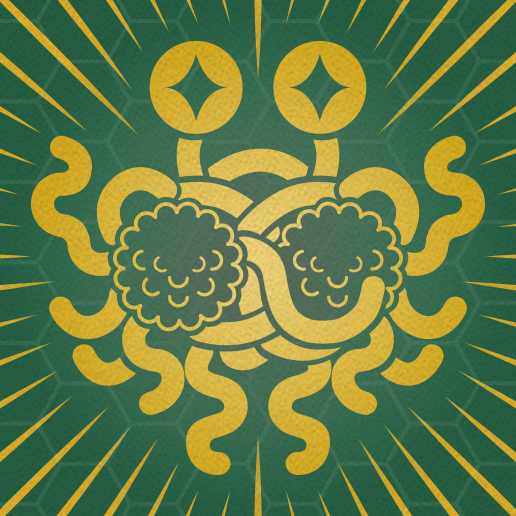 “Accept His Noodly Magnificence into your heart, and ye shall forever be free”

Even though those weirdos wearing colanders on their heads can be found all over the galaxy, the Pastafarians do have a world of their own. They inhabit a tiny planet called Pastafaria – a giant ball of spaghetti and meatballs. Pastafaria is a planet rumored to be made of pasta, gifted by His Noodliness, the Flying Spaghetti Monster. The Pastafarians prefer to stay out of the global galaxy conflicts and live in peace and harmony, just as her Noodliness guides them to. They do not have any fleet or military units and rely solely on the protection of the Flying Spaghetti Monster.

There are many legends about the first encounter of pirates with the Flying Spaghetti Monster (further FSM). The most popular one is about Captain Mosey, a mistreated shipyard cook from a peripheral Federation planet, who quit his job to become a pirate. Mosey believed piracy was about exploring, finding treasures, having fun, not about pillaging to survive and dealing with economic recessions on a cosmic scale. His ship was just a trading vessel, not a military frigate. Technically, he could upgrade it at a shipyard, but his budget would be barely enough to fix the railing. Mosey wondered, is that what life is all about? Struggle for survival until the very death?

Everything changed that fateful night when Mosey was sleeping after a long day of a cargo delivery job. In his dream, he was approached by none other than the Flying Spaghetti Monster. It asked Mosey’s help as a pirate captain – to liberate all of his former colleagues who are still mistreated by their management. Mosey answered he isn’t a pirate captain, because he doesn’t even have a pirate ship. The FSM argued that what makes a pirate captain is a crew, not a ship! It didn’t convince Mosey, and he dismissed the dream after he woke up. However, when he left his cabin, he saw a brand new pirate ship waiting for him – Lasagne. When he boarded the new vessel, he found dozens of colander hats and a note which said “Wear these when you need help”. 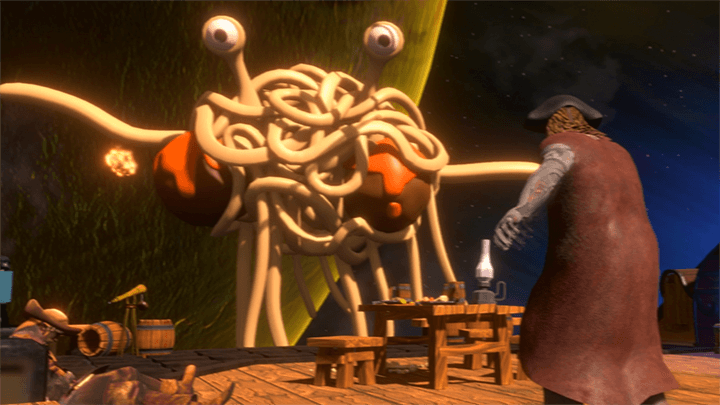 Mosey ditched his old junk and sailed back on Lasagna to his past home planet. When he offered his former colleagues to join him as his pirate crew, they couldn’t help but laugh. Mosey put a colander on his head, and the FSM agreed to provide three miracles to convince them. The first miracle was a rain of spaghetti sauce, which the workers dismissed as a fake. The second was a hail of linguine, which made them frown at best. The final miracle was repetitively playing some Glyphens’ rap in their heads. Mentally bombarded by the depths of the lyrics, the workers accepted her noodly magnificence into their hearts and agreed to sail onward with Mosey on his voyage.

Their boss, however, did not intend to let them go. He rounded up a fleet of massive Federation warships and went on pursuing Mosey. It wasn’t long before they surrounded Lasagne and demanded the pirate to surrender. Mosey ordered his crew to put colanders on their heads. As soon as they did, the enemy cannons fired. But instead of cannon shells, Lasagne was hit by a barrage of harmless meatballs. The Federation forces attempted to ram Lasagne, only to find themselves entangled by giant noodles. It was then, the Flying Spaghetti Monster showed up in its full grace. The Federation forces, sensing their most recent meals in their pants, retreated in haste.

I’d Really Rather You Didn’ts

Following the FSM’s guidance through the endless black void, Captain Mosey and his crew reached Colandia – a star of spheric light covered by a giant colander with rays of light protruding out of its holes. It took a while for the crew to realize that the FSM wanted them to land on its surface. Did the FSM bring them all the way here only to have them burnt to death? This kind of questions gave it a hard time for Captain Mosey, but he never lost faith. He ordered his crew to put colanders on their heads again and charged the ship at the star. Only when they realized Colandia’s heat wouldn’t harm them, they praised the FSM, and successfully landed on Colandia’s surface.

Following the landing, Mosey climbed up the giant colander and met the FSM on top of it. The FSM gave Mosey ten stone tablets called the “I’d Really Rather You Didn’ts”. Mosey began to climb down the giant colander but slipped and dropped two of the ten tablets into one of the colander holes. It left Mosey with only eight, which is why Pastafarians have such flimsy moral standards. Mosey called these the “Commandments” but the rest of the pirate crew got confused and called them “Condiments”.

After accepting the “I’d Really Rather You Didn’ts”, Mosey’s crew was granted a new planet – the Pastafaria. This planet looked like a spherical system of meatballs wrapped up by giant noodles, surrounded by a ring of Macaroni. They settled down and started building their own community. For the first few decades, they lived their unscathed lives, careless to the world around them. However, after they’ve almost been wiped out by two Global Galactic Wars, the Pastafarians realized they needed to grow their political and economic influence across the galaxy. The next few decades worked to their advantage – the Cold War gave rise to the second wave of piracy – which resulted in more people visiting Pastafaria. Subsequently, more people were exposed to the Pastafarian ideals and eventually decided to join. Within two decades, the Pastafarian community grew almost tenfold. 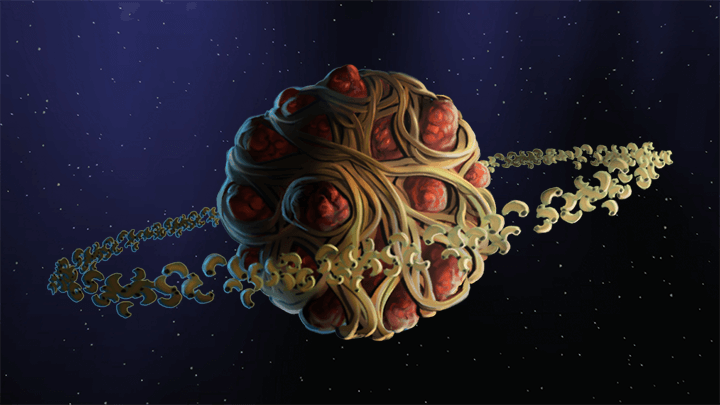 As for Captain Mosey himself, the domestic life wasn’t appealing to him. He went back to roaming space, storming vessels and kidnapping young sailors to be converted; if they did not accept, they would be held for ransom at a ridiculously low price. Sadly, this would be the cause of Mosey’s downfall. During a random pillage session near the planet of Hydropolis, two sailors were captured. One of them was a human, the other one was a Coggort. Both refused to convert to Pastafarianism and were held for a ransom of 1 gold.

The human, however, was insulted at the ransom demand – not just because it was low, but because his price was equal to that of an inferior alien. The man believed human beings were superior to aliens, called the pirates “alien sympathizers” and promised to execute the crew of Lasagne in the future. After his freedom was purchased, he assembled a small army, captured Mosey and his crew, and kept his promise. It turned out this man was none other than Damon Lance, a powerful political extremist who would usurp the Hydropolis throne and start the most bloody crusade of the history of Hyperborea – the Global Galactic War I.

The Pastafarian society is the most diverse one in the galaxy. Its members are united by ideas and beliefs that almost can’t be taken out of context. A human veteran sailor chilling on a Telossian’s landmass, drinking rum with a Coggort who pets a Celestial, all the while listening to a Glyphen’s rap beat – this is a quite common picture on Pastafaria. However, due to some unpleasant past experiences, the Pastafarian vendors prefer to avoid letting guests and business partners into their planet, unless they accept the FSM into their hearts. Instead, they set up a space station at the planet’s orbit to conduct their business there, thus avoiding unnecessary risks.

Pastafarians are not only celebrating and praying all day. They have their daily jobs and businesses to maintain, which mostly includes conducting trade with other planets. To boost their influence, they establish and maintain alliances with other planets. To expand their services, they set up a network of Drop Stations across the galaxy to provide storage and repair services on the field. To gain new converts, they continue Captain Mosey’s work – offer the kidnapped hostages to accept the FSM into their heart and soul. Should the latter refuse, they trade them for the ransom of 1 gold.

The Pastafarians do not have any fleet or military units and rely solely on the protection of the Flying Spaghetti Monster. Pastafarians run the Shipyards where players can upgrade and customize their ships, and ambassadors, who can trade the hostages the players capture for ransom. The Flying Spaghetti Monster itself sells unique consumable abilities called the Pastapowers.