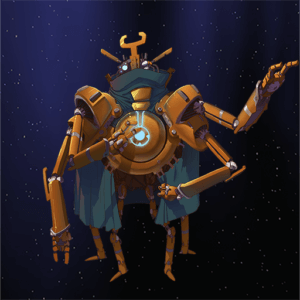 Coggorts are a race of mechanical ants made of woods and cogs, which attack in large cohorts and chop through their enemies. They obey their cerebrates’ commands from the Hive Board, a monolithic spaceship that floats above Hyxon, their planet. They are like a giant corporation, where all of its employees are designed and manufactured explicitly for the positions they occupy.

However, Coggorts are more than a mindless horde of robo-ants. They are artisans, builders, crafters, engineers, and merchants. They are those who invented the solar sails and connected the galaxy, and they keep dominating the spaceship production market. No human manufacturer can compare to the production efficiency Coggorts provide. Quick and good.

Yet, it hasn’t always been like that. Thousands of years ago Coggorts were sentient biological species. They were divided into independent hives fighting for the dominance of the planet. Everything changed when humans showed up in an attempt to colonize Hyxon. Even though the hives managed to repel the invaders, one of the human ships crashed on the surface. Some curious Coggorts infiltrated it and interacted with the human pilots before killing them. They didn’t realize that by doing so they have doomed themselves as a race – an epidemic brought by humans would nearly wipe out the Coggorts in the near future.

Coggorts, who are almost entirely wiped out by the epidemic brought in by human colonists two decades ago, finally find a solution. They created mechanical bodies and transferred their consciousness into them. This act of mechanization saved their species from the epidemic but makes them more prone to consciousness manipulation. Instead of being born naturally, Coggorts would be entirely engineered on manufactures. This would allow cerebrates to create mindless workers who just obey their commands. Since the cores of the mechanoids were still organic brains, Coggorts had to make sure they didn’t develop their curiosity on their own.

In order to prevent another potential tragedy due to some curious individuals, they created a single hive mind that would seize the means of Coggorts’ production. This way they could make sure all curious individuals were quickly detected and utilized. Since the invention of the Solar Sails, the hivemind is controlled by Solar Industries LTD, a corporation responsible for inventing the Solar Sails, the very technology that allowed space travel. Solar Industries built the Hive Board to control the planet from above, thus establishing their absolute rule that pertains up to these days.

Solar Industries LTD eventually monopolized the production of Solar Sails and raised the prices so high up that it ruined the economy in the entire galaxy. This resulted in common hatred against the Coggortian monopolists, especially on Hydropolis, the most influential human planet at that time. Decades later, due to the rising nationalism across the galaxy, a new empire was established – the Empire of the Holy Lance. This new military entity started its Holy Crusades, dedicated to wiping out Coggorts, and eventually all alien races, from the face of the galaxy.

Not expecting this turn of events, Coggorts were attacked by the Holy Armada that besieged Hyxon for years. They were fighting as best as they could, losing 61% of their population as a result. Only by uniting with the forces of the Resistance – which contained all other races, as well as Galactic Federation and Arkhan Dominion – could they avoid total annihilation.

As soon as the war ended, they reopened their manufactures and focused on producing as many military mechanoids as they could. When the Federation and the Dominion attempted to manipulate them into fighting their war during Global Galaxy War II, Solar Industries literally swarmed both armies with their mechanoids. They drove the intruders out of their space and taught them they are not to be reckoned with. This way they created another powerful political entity, equal to those of both superpowers. 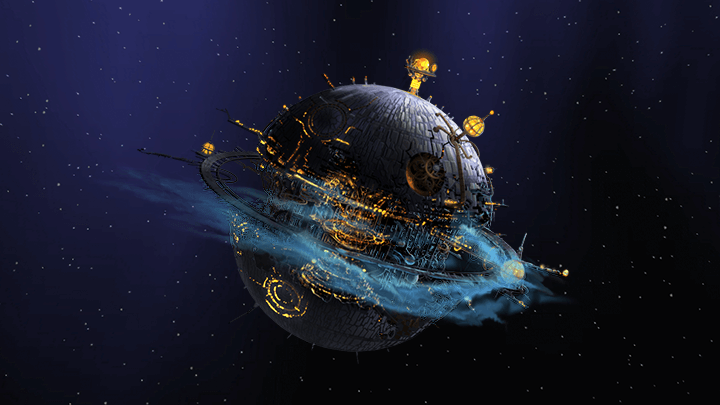 Coggorts are a typical hive. Every working ant is manufactured for nothing but a single purpose. A cog in the machine. And yet, Coggorts are not machines – they are brains put into machines. They can, and do develop self-consciousness. Therefore, even though the lifespan of mechanical Coggorts could be as long as their parts are maintained, they actually live for barely a decade before getting utilized. After a decade, self-realization usually starts taking over. The good thing, though, is that, unlike biological creatures, Coggorts can actually start working from the very day they are incepted.

Not all Coggorts live and work in the hive. Some of them develop a very dangerous flaw called “curiosity”. As history has shown, this trait brings no good. When a new Coggort is diagnosed with curiosity, it is immediately quarantined and utilized. However, some of them manage to escape the clutch of the hivemind spread across the galaxy. They proudly brand themselves as “The Flawed Ones”, as if to piss off the Coggort corporations. Despite being robots, they open themselves to emotions, various lifestyles, and even relationships with different species. Some even join various intergalactic unifications such as the Mallard Order, Federation, or even Pastafarians.

However, no absolute rule goes unchallenged. There is a new threat on the rise – “The Hacker”, a renegade Coggort, abducts the Coggorts diagnosed with high levels of “curiosity”, just before their utilization. There are rumors he is trying to raise an army of his own curious Coggorts and overthrow the Solar Industries LTD. Without total control, the Hive Board fears this trope would lead the Coggorts back to their primal state and put the smaller hives against each other.

Coggorts usually send forth some Swarmicons which unleash a swarm of Beecons. Beecons are expendable and abundant, so the Coggorts’ combat tactics are the most straightforward in the galaxy. And yet, one of the most effective ones.