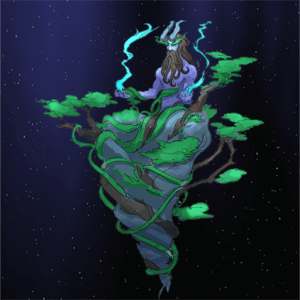 “Purity of heart and soil”

“A good society rests on the shoulders of well-rooted individuals”

Telossians are sentient human-island hybrids – humanoid upper bodies that grow like trees from flying islands. These flying islands are, by all means, vital parts of their bodies, their sources of life. Disconnecting the humanoid from the island is like disconnecting a tree from its roots. But it shouldn’t be mistaken for a disadvantage – Telossians are in full control of their landmasses, as these are the continuation of their own selves. Additionally, mastering the powers of the skies, they are capable of utilizing its substance into devastating energy blasts.

The most important fact, however, is that Telossians are human! Well, at least they used to be. Thousands of years ago, a group of human colonists arrived in Azure, a surfaceless light blue planet with a white dwarf star (dwindled star) in its core. The only landmass they found were small flying islands. Their attempt to land on one of them ended up with their ship being sucked into the planet’s core. Those who succeeded to eject remained stuck on those remote flying islands.

What happened next remains a mystery to this day. Legends say some of the survivors found a majestic island with a tree. They decided to camp next to its roots, but the tree spoke to them and introduced herself as the Mother Tree. Seeing their dire situation – starvation, lack of resources, diseases, she offered salvation – to forever eliminate their need for food. In exchange, they would accept her codex and spread justice across Azure and beyond, but always stay pure in “heart and soil”.

As the colonists agreed, the Mother Tree infused them with tremendous powers and allowed them to become one with the soil. She turned them into humanoid creatures bound to floating islands, growing from their lands like trees. This way, they didn’t have to rely on food anymore – their nourishment came from the landmasses they were connected to. And so, a new race was born. They called themselves Telossians, which meant “the ascended”. They would grow and populate this world but never leave it. Leaving Azure would give away their purity.

The harsh planet of Azure, however, had a new challenge for the newly established civilizations. Celestials, its native inhabitants, started attacking them en masse at night. These majestic butterflies attracted to light proved to be quite ferocious creatures that could tear islands apart. Telossians learned that in order to avoid those predators, they had to avoid emitting any kind of light. At first, it worked, but it was quite difficult to teach children to follow the “no lights rule”.

Eventually, Telossians learned how to master and weaponize the energies of Azure to defend themselves. Instead of hiding from the cosmic predators, they fired energy blasts at them. During the next centuries, more and more Celestials were eradicated by the Telossian combined forces. It is only during the Global Galaxy War I when Telossians suffered great losses due to a genocide committed against them by the Empire of the Holy Lance, they realized how destructive their politics are towards the minor species. They neglected the codex of the Mother Tree, and she turned away from them. The genocide… was merely a punishment.

Telossians decided to preserve the Celestials by creating an artificial habitat for them. They placed powerful light beacons outside of the planet’s atmosphere. These beacons attracted Celestials with light and ensured they would never look back at Azure. This way they created some natural “reservations” for the cosmic predators and forbade anyone to enter its territory. 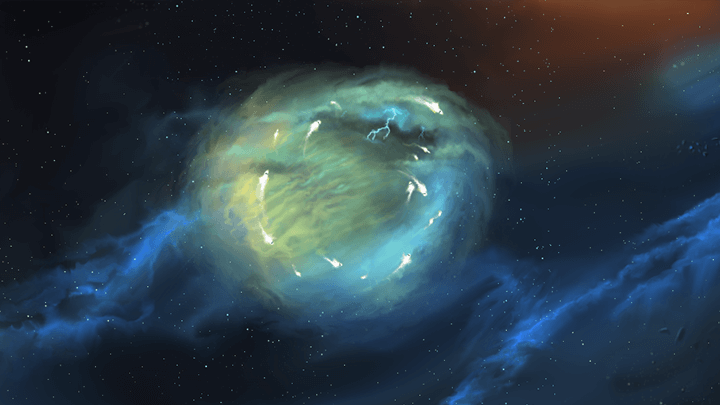 During the first Global Galaxy War, Telossians have suffered a lot at the hands of the Empire of the Holy Lance. The Holy Crusade swept through their planet eliminating almost half of their race. Only uniting with the forces of the Resistance – which contained all other races, as well as Galactic Federation and Arkhan Dominion – could they avoid total annihilation.

When, three decades later, the Federation and the Dominion attempted to manipulate them into fighting their war during Global Galaxy War II, Telossians united all other races under the Azurian Planetary Council. They drove the intruders out of their space and taught them they are not to be reckoned with. This way they created another powerful political entity, equal to those of both superpowers.

Telossians have become quite powerful both politically and militarily. Knowing their status might be challenged and tested at any moment, they too participate in the cold war between the other superpowers. They are even attempting to unite into huge landmasses, but it doesn’t work well. Since they are plants, they won’t be able to change their positions within the landmasses. Not only it restricts their mobility but also forces them to combine their roots with “neighbors” they might not be fond of. It results in lots of childish fights like who is going to attach to whom.

Nowadays, the Azurian Planetary Council acts as the neutral arbiters for the entire galaxy. Even though there is no official alliance between them and the other races, they do respect the council’s authority. They welcome everybody on their planet but forbid them from visiting the Celestials reservations. Violating those restrictions might not only get the violators arrested but also damage the diplomatic relations with their patrons. The Council believes this is the only way to maintain peace in the galaxy.

Following the two Global Galaxy Wars, Telossians have been officially recognized as a neutral political entity where all disputes have to be solved. There are hundreds of Judgicators across the Azure planet that are constantly busy with resolving intergalactic conflicts. Each of them is a member of the Azure Council and is obliged to obey its Jurisdiction. The entire Jurisdiction is written with magical runes on slopes of Telos Mother Tree – which is believed to be the very place the ancient human colonists “became one with the land”. The Jurisdiction itself, however, is pretty vague, which gives a lot of space to biases, personal preferences, and even straight-up corruption. 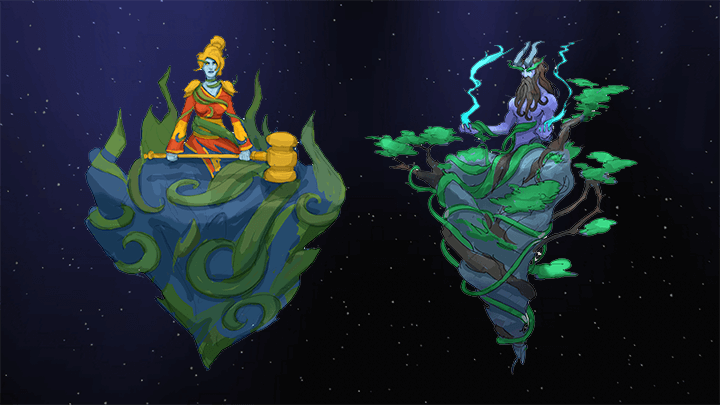 The Telossians reproduction function is an interesting one. The Azure planet has a unique attribute – its aerial substance grows into a landmass! As such, Telossians constantly grow in size. When an island grows large enough, its roots give birth to more Telossians, as it usually happens with plants. These also grow up in size, both their humanoid and landmass parts. Eventually, those “children” have to detach from their parents and become islands on their own. Needless to say, the gender/sex functions have become irrelevant because each “island” could grow up their own children. Upon death, Telossians either break into smaller islands that give birth to new Telossians, or simply dissolve in the Azurian substance.

The Telossian belief system is centered around staying on Azure. Due to their physiological dependence on each other, they must see to it that they never corrupt their own soils, because they transmit it to each other during unification. Therefore, it is forbidden by Telos Mother Tree herself to leave the Azure star system, because who knows what they might encounter and bring in.

Sometimes, Telos Mother Tree can provide permission to leave Azure, other times Telossians leave on their own. Either way, those that return need to wait for a few years before their soil cleans up. Only then, they and their children are permitted to come into physical contact with other Telossians. Even when they let non-telossian visitors in, they keep their distance. This physical isolation is interpreted as purity given by Telos Mother Tree.

Telossians can combine into bigger ones with an island of a few Telossians. They become a single unit with lots of health and multiple attacks. Upon death, they either break into smaller islands that give birth to new Telossians, or simply dissolve in the Azurian substance.